The SHRA was established in August 2010 by the Minister of Human Settlements as per the Social Housing Act, No 16 of 2008. SHRA is a public entity in terms of Schedule 3A of the Public Finance Management Act, No. 29 of 1999 (PFMA).

Social housing is state subsidised rental housing targeted at low to medium income groups earning between R1850 and R22 000. The purpose of social housing is to contribute to the national priority of restructuring South African society in order to address structural, economic, social and spatial dysfunctionalities.

Social housing therefore contributes to widening the range of housing options available to the poor. The core mandate of the SHRA is to invest into, enable and regulate the social housing sector. 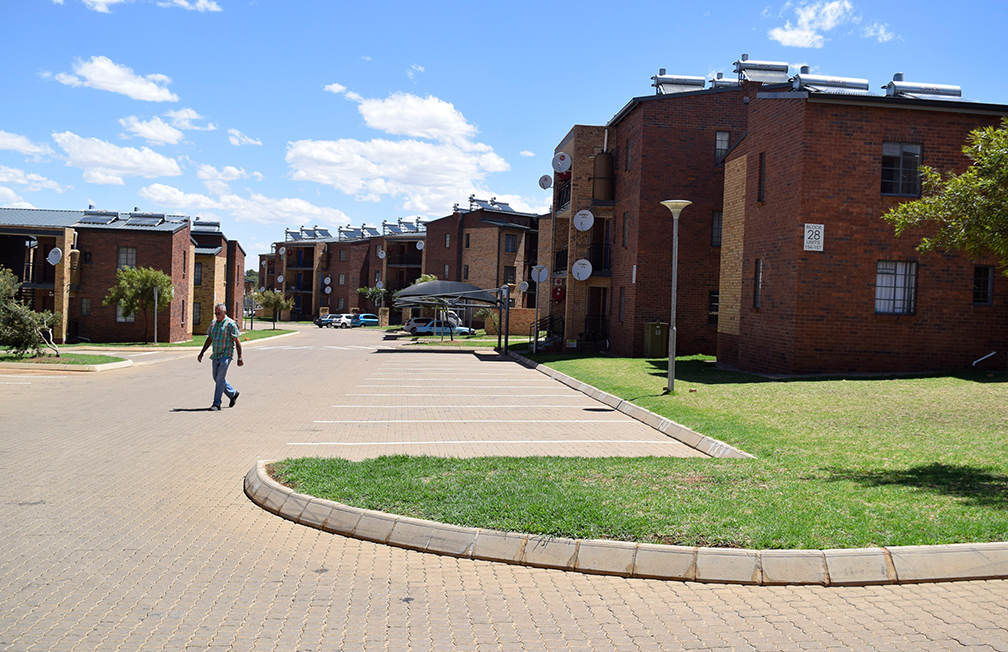 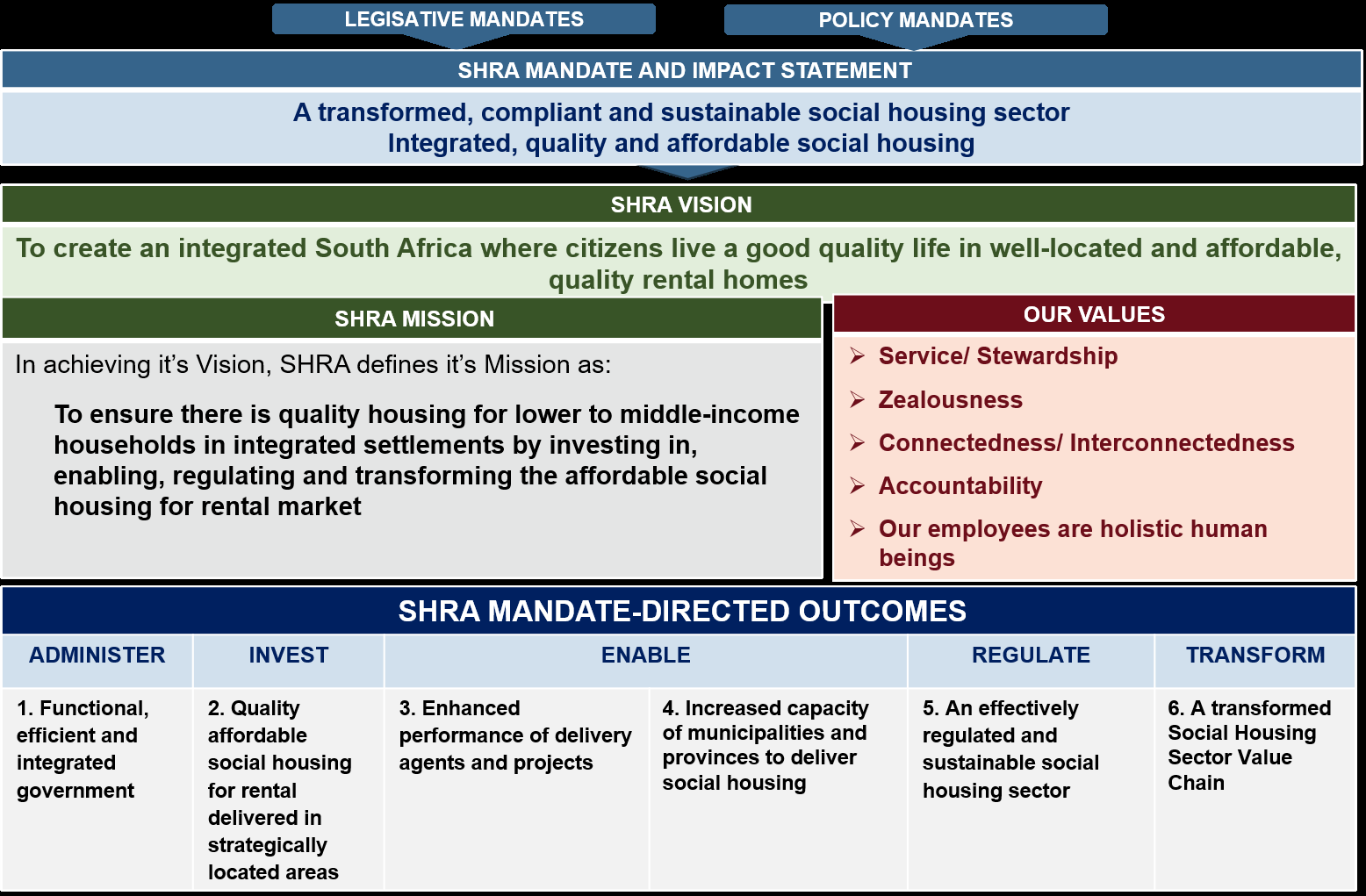 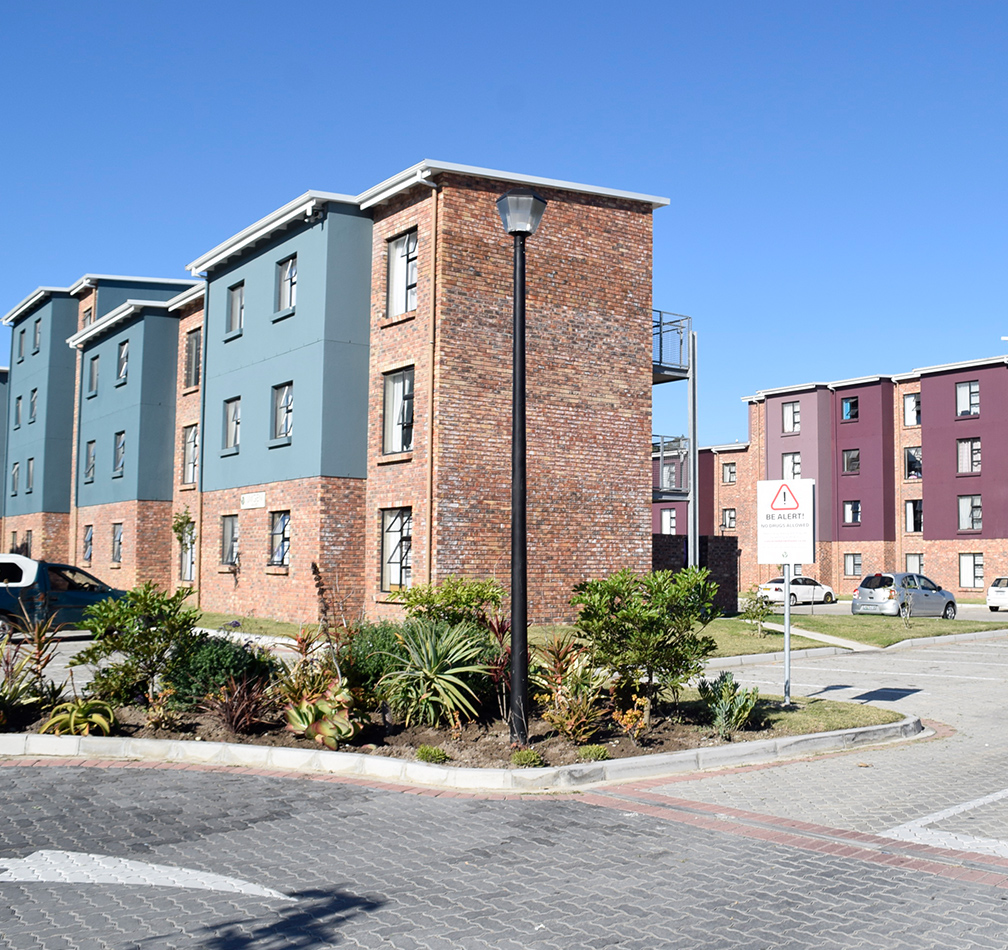 However, there are many other laws which also govern activities in the sector. SHRA also makes rules (e.g. The Transfer and Disposal of Social Housing Stock and rules on Long-Term Accreditation of SHIs) on certain aspects of social housing from time to time.

The SHRA is the regulatory body responsible for regulating, capacitating, and investing in the social housing sector. The SHRA administers the subsidies available to social housing and associated norms and standards. FIND OUT MORE ABOUT SHRA

If you have any comments, queries or suggestions, please contact us.

Take a look at our leadership structure of executives

The SHRA was established in August 2010 by the Minister of Human Settlements as per the Social Housing Act, No 16 of 2008

Explore what the SHRA has to offer!

Matshidiso Mfikoe served in the Municipal Services Committee. She was a Member of the Mayoral Committee for Health, for Environment and Corporate Services, as well as for Public Safety.

Matshidiso Mfikoe holds a Teacher’s Diploma from Soweto College of Education, a postgraduate diploma in Public Administration from a private university, and has attended numerous leadership courses.

Matshidiso Mfikoe has worked with many communities over a number of years and thus has a great understanding and appreciation of their need for affordable and sustainable housing which is the core mandate of the SHRA. She is determined to assist the SHRA in achieving its core mandate.

A civil engineer by profession, Confidence Tshilande is committed to fostering a more transformed, inclusive and sustainable housing sector by employing her technical expertise and leadership skills to ensure that quality and affordable housing is delivered efficiently.

An attorney by profession with significant experience in his career; he aims to provide the executive and management of SHRA with oversight support by sharing and tapping into his extensive insights and knowledge of providing housing solutions for the poor and marginalised. He believes that this will be expedited by ensuring that SHRA partners with the private sector and industry partners and develops integrated housing solutions and developments which is close to required amenities and enables employment opportunities.

Ashley Latchu is an IT specialist currently completing his doctorate focused on research within the public sector, and has served on several boards and board subcommittees. He is committed to enabling the SHRA to be able to use 4IR technologies and good corporate governance to augment and enable its mandate.

Ayanda Olifant’s career has been characterised by two roles – an economist and a strategist. She has a breadth of experience across industries, including banking; FMCG and telecommunications, and holds a Masters in Economics, Masters in Business Administration. Ayanda is committed to assisting the SHRA to play an integral role in addressing the income and spatial inequalities in South Africa.

Mashukudu James Maboa is a Chartered Accountant with corporate finance and governance experience. He has played an instrumental role in various boards over the past decade.

James is committed to supporting the SHRA to become a vehicle to provide affordable and quality social housing for qualifying South Africans.

An attorney by profession with significant experience in her career and years of board experience at large, reputable institutions, Lahlane Malema remains committed to developing, growing, promoting, protecting and sustaining social housing.

Pulane Thobejane, a social worker by profession, is committed to addressing the imbalances of the past, by providing decent/affordable housing and renting options that are sustainable for vulnerable communities. She boasts 20 years of experience in the public sector, including 17 years in the Gauteng Department of Social Development.

Pulane Thobejane holds an honours degree in Social Work, a postgraduate certificate in labour relation and Human Resource management, and has served on various Boards.

Sanele Masiza is a former Mvula Trust board member. She has held various leadership positions in financial institutions. She brings more than 15 years  experience in risk management, spanning over various domains such as operational risk, credit risk, compliance and enterprise risk management. Ten years was spent in senior management roles in financial institutions and regulatory entities. With this expertise, the SHRA can effectively evaluate risks that can occur within the sector.

A gifted entrepreneur with a finance and investor relations background, Zimbini Hill joined the SHRA as an interim Council member in 2018, and Chaired the Project Development and Funding Committee.

Zimbini Hill currently serves as a board member on various private, public sector and social enterprises; and is convinced that with the public sector operating as it was designed to, it will play a vital role in ensuring a better South Africa for all. Zimbini Hill hopes to wholeheartedly serve the SHRA to successfully meet its mandate.

Ms. Mbane has a wealth of experience in governance and administration. She has 30 years’ experience in the public sector of which 15 years is at a senior management level. She  is the former CEO of the Health and Welfare SETA as well as an Interim CEO of the IDT. She has led various governance structures in various sectors.

As a senior official, she has served in the human settlements sector for 7 years and was instrumental in the formation of some of the entities of the department. Her experience as a specialist in the organisational developmental space, and being an international coach, will come handy an enable the SHRA to benefit from her knowledge and experience.

Busisiwe Nzo is a practicing professional quantity surveyor (PrQs) registered with the South African Council of Quantity Surveying Profession (SACQSP). She is currently a partner (managing and active) at a private practice with offices in various regions of the country.

Busisiwe has served as a council member of the National Home Builders Registration Council (NHBRC). She has also served in other boards of other state entities e.g. Gauteng Partnership Fund (an implementing agent of the Gauteng Human Settlements, responsible for other programmes such as strategic urban renewal projects and those designed to promote participation of previously disadvantaged owned companies in the affordable rental market). She is currently the Chairperson of the Social Housing Regulatory Authority (SHRA).

Busisiwe is committed to helping create an impact and implement changes within the social housing development space to better the livelihoods of South African communities.