The Social Housing Regulatory Authority (SHRA) was established in August 2010 by the Minister of Human Settlements as per the Social Housing Act, No 16 of 2008. SHRA is a public entity in terms of Schedule 3A of the Public Finance Management Act, No. 29 of 1999 (PFMA).

The primary intension of the Social Housing Act is to deliver affordable, state subsidised rental housing (social housing) targeted at low to medium income groups. The purpose of social housing is to contribute to the national priority of restructuring South African society in order to address structural, economic, social and spatial dysfunctionalities. Social housing contributes to widening the range of housing options available to the poor. 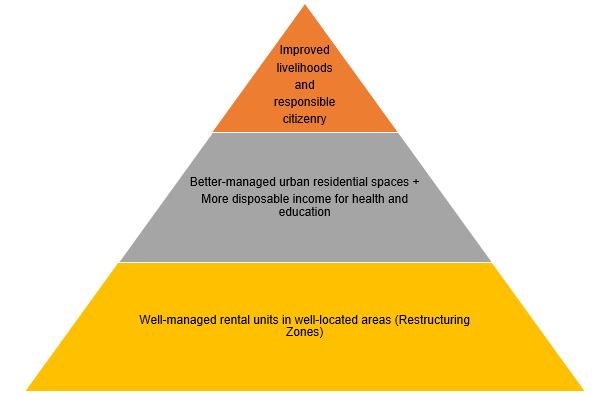 The SHRA is the regulatory body responsible for regulating, capacitating, and investing in the social housing sector. The SHRA administers the subsidies available to social housing and associated norms and standards.

At a provincial level, co-ordination of the social housing sector is provided by a Provincial Steering Committee (PSC). The PSC is chaired by the provincial department responsible for human settlements and includes representation from: the SHRA, the National Department of Human Settlements (DoHS); municipalities and the South African Local Government Association (SALGA); SHIs and ODAs; the National Housing Finance Corporation (NHFC), and representative sector bodies. At a national level, coordination is provided by the Provincial Steering Committee Chairpersons Forum and the National Rental Housing Task Team (NRTT).

The social housing sector operates within a legislative and policy framework. The Social Housing Act, 2008, together with the regulations made thereunder, is the main piece of legislation governing the social housing programme. However, there are many other laws which also govern activities in the sector.

SHRA also makes rules, (e.g. The Transfer and Disposal of Social Housing Stock and rules on Long-Term Accreditation of SHIs) on certain aspects of social housing from time to time.

The SHRA’s vision is to see affordable rental homes in integrated urban environments through sustainable institutions. To achieve this:

In summary this can be defined in the following vision statement:

The mission of the SHRA is to facilitate delivery of quality, sustainable social housing at scale to advance the needs of low and middle-income groups in support of spatial, economic and social restructuring.

In delivering its mandate, the SHRA and all its staff members are guided by a strong set of values collaboratively developed by the employees of the SHRA. These values reflect the organisational culture and how we approach our daily work.

Below are the values which the SHRA team is committed to: